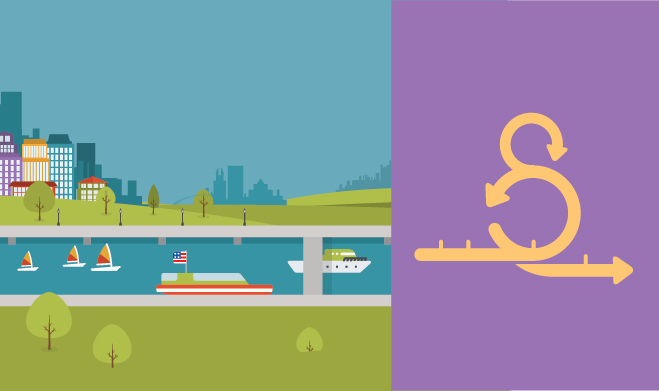 There are strong arguments to make that the Erie Canal is the most significant public works project ever completed in the US. The original canal was built 100% with state funds and had a profound impact on our country. Prior to the Canal, the Mississippi and New Orleans was the way goods were shipped from the Midwest.

New York was a backward rural state with extremely high costs to transport any goods from inland to the East. The Erie Canal connected the Northeast to the Midwest in ways not possible prior. It transformed New York state into the agricultural, industrial, commercial, and financial center of the country.

There were no engineering schools in America when construction began on the Erie Canal. Boston had just finished a canal, the Middlesex Canal, which took eight years to complete at a rate of two miles a year. The lead engineer of that canal turned down the chance to build the Erie Canal. His decision may have been a good thing, considering that at the rate the Middlesex Canal was built, the Erie canal would not have been completed until 2006.

To build the canal they had to invent machines and conquer extreme hardships. They had to create the longest canal in the world by cutting through 300 miles of primeval forest, digging through the great Montezuma Swamp, building the longest stone-arch bridge in the world, and cutting a 30 foot-deep channel through three miles of solid rock before dynamite and many other engineering triumphs were developed. All of this lead by four engineers who had never built a canal before.

A canal would save businesses an incredible amount of time and money getting goods shipped between the growing Midwest and the already booming cities in the Northeast and would make obtaining goods to Europe viable. In the first year of operation, the canal cut cross-state transportation costs by 90%.

They had NO IDEA how they were going to do it, and many thought they were crazy. In fact, it was initially proposed in 1807, though construction didn’t start until 1819 and did not reach Buffalo, NY for another six years. Funding was turned down, bills were vetoed, and many economic and political challenges had to be overcome. Dewitt Clinton persisted, and it became the first canal project in the US to be financed by the public at a total cost of a staggering $7,770,000 spent from 1817 to 1825.

One key to their success was this: The architects made sure that each section of the canal was completed and generating revenue as they built it. However, what happened as a result, was largely unexpected.

With each completed section, the canal became more profitable and led to many ancillary benefits to the local communities that the canal served. The towns along the canal boomed, local residents had access to more and fresher goods from the East and West, and local labor markets surged. As the Canal was built, they had evidence of success, giving them the confidence to continue on to the next section. Success breeds success.

While the construction of software is very different from the construction of canals, there is a relevant analogy here for taking a “Minimum Viable Product” approach to developing large-end software products and platforms. How can we start with the smallest possible initiative that will net us enough gains to show us that our vision is viable? To demonstrate success that can empower us to build the next phase.

Here are a couple of tips:

If you do these things, you should be well on your way to building early momentum for your software product. Big projects often feel daunting in the beginning, but as Laozi (6th Century B.C.) said:

The New York Times. Our System of Canals; The Past and Present Profit of the Erie Canal – Future Prospects – The Canals Fairly Paying Their Way. http://www.nytimes.com/1860/02/01/news/our-system-canals-past-present-profit-erie-canal-future-prospects-canals.html?pagewanted=all